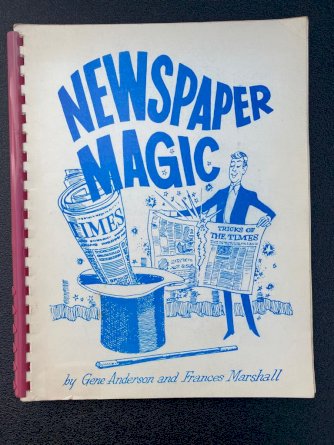 There are few things more common, less suspicious or as inexpensive as a newspaper! Here's a whole book of tricks to be done with your daily paper-some created especially for this book, some gathered from around the world, and some included for completeness sake.

Contents include Gene Anderson's prize-winning routine, "Extra, Extra"-a laugh a minute with a newspaper. It was the sensation of the Colon 1971 show. Also, his very original Torn and Restored Newspaper, the best we've ever seen, and we've seen them all. Fast, direct, clean - just great!

And more... a selection of tricks by Val Andrews, another by Eric Hawkesworth, a section on newspaper work with liquids and silks, one on Clippo and its many possibilities, Martin Gardner on Afghan Bands, classic effects and other newspaper miscellany, ideas, tips, and gags.

DOZENS OF TRICKS OF ALL KINDS - ''TIMELY'' TRICKS! A must-have book for anyone developing a routine in newspaper magic or paper tearing.

Profusely illustrated; newly edited and enhanced with new photographs, with Chicago magician Ben Whiting photographed showing many of the effects.

TO ORDER
Please bear in mind that the second-hand apparatus, books and tricks in our stocks are generally limited to one of each particular item.

Once you have seen what you are looking for please email to check availability, and to reserve items and to receive a shipping quote.

We will the contact you with full details and also the shipping costs.

Payment can then be made to our PayPal account.

SHIPPING
All items are dispatched using a signed for/recorded service – this ensures parcels are delivered safely and with proof of delivery.

We ensure all items are packed securely prior to dispatch.

RETURNS
Returns/refunds will only be considered for faulty items. 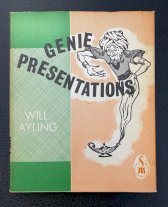 Genie Presentations By Will Ayling 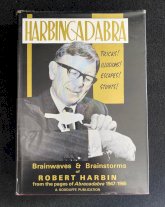 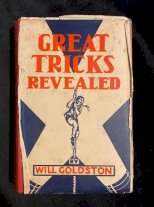 Great Tricks Revealed By Will Goldston