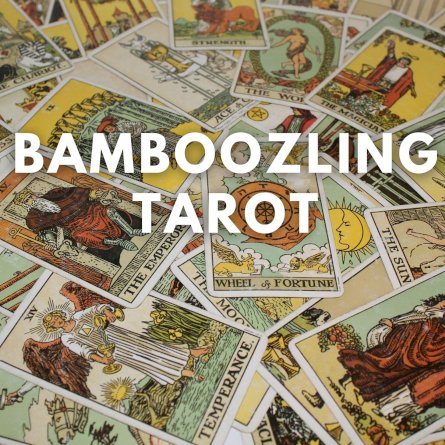 EFFECT
Instead of the performer bamboozling the audience a spectator is given the chance to bamboozle the performer!

"My job," says the performer, "is to bamboozle you, but on this occasion I am going to give you the chance to bamboozle me." Performer hands the spectator nine Tarot cards for shuffling and examination, explaining the different values and suits. He takes them back and deals three piles of three face-down cards as he spells "BAM  BOO ZLE."

"Pick up whichever pile you prefer, mix the cards, then look at the face card and remember it. Now place the pile on whichever of the other two piles you like."

The spectator does so and the performer picks up the pile of six cards and drops it on the remaining pile.

"This," he continues, "is where you can bamboozle me if you want to. I’d like you to tell me the value of the Tarot card you looked at........ignore the element/suit for the moment......and you can lie, or you can tell the truth."

"Now for the element/suit.......and once more you can try and bamboozle me by lying or telling the truth." The spectator says, for example, "Goblets" so the performer spells "G-O-B-L-E-T-S" and drops the remaining cards on top.

The spectator says which he did and that is spelled out (LIED – TRUE – BOTH) and the remainder of cards dropped on top.

Picking up the packet of nine Tarot cards, the performer holds it face-up in his left hand and says he will spell out a word. He takes off the top card, lays it face-up on the table and spells "V." The next card is laid on top of this one as you spell "A," then continue laying down cards for "N-I-S-H-E-D." The spectator has to admit he did not see his card.

Picking up the packet of cards again, the performer says, "You know, it’s a pity you didn’t think of (the name of the last card dealt face-up), because that’s supposed to be a mysterious card."

You turn the packet of cards face-down and deal the bottom card face-down on to the table. "What card did you think of?" When spectator names his card you say, "I told you (naming last card seen) was a mysterious card, take another look at it!"

The spectator turns the card over and finds it to be his chosen card.

TO ORDER
Please bear in mind that the second-hand apparatus, books and tricks in our stocks are generally limited to one of each particular item.

Once you have seen what you are looking for please email to check availability, and to reserve items and to receive a shipping quote.

We will the contact you with full details and also the shipping costs.

Payment can then be made to our PayPal account.

SHIPPING
All items are dispatched using a signed for/recorded service – this ensures parcels are delivered safely and with proof of delivery.

We ensure all items are packed securely prior to dispatch.

RETURNS
Returns/refunds will only be considered for faulty items.